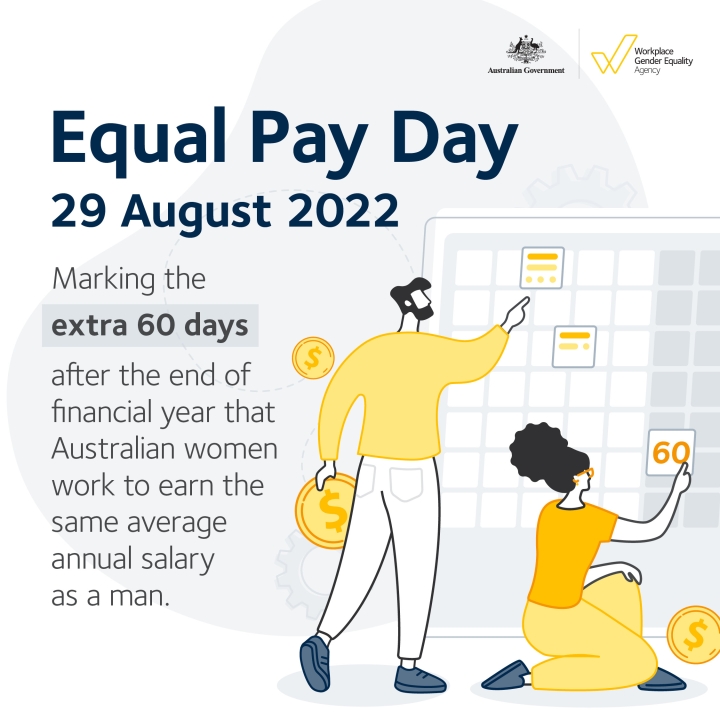 29 August 2022 is Equal Pay Day. Equal Pay Day marks the 60 additional days from the end of the financial year that Australian women must work, on average, to earn the same annual salary earned by men.

This year, the national gender pay gap is 14.1% for full-time employees, a rise of 0.3 percentage points over the last six months.

To mark the day, WGEA is calling on employers to take urgent action on gender equality with five steps to close the gender pay gap:

Lots of employers are already taking action to close their gender pay gaps. Learn how international engineering and construction company, Laing O’Rourke transformed their managerial pipeline, with employees now twice as likely to have a female leader at a construction site than they were a number of years ago.

How can you support Equal Pay Day this year?

This Equal Pay Day, we are encouraging everyone to get involved on social media.

Remember to use the hash tags #EqualPayDay and #GenderPayGap and tag us!

Here are some ways you can join the campaign to close the gender pay gap:

Example post for employees: Today is #EqualPayDay! Women have to work 60 more days than men to earn the same amount. I’m going to WGEA’s Data Explorer to find out if my employer has done a pay gap analysis and is acting on the findings. #GenderPayGap @WGEAgency

Example post for employers: Today is #EqualPayDay! We will be joining the fight to close the #GenderPayGap by conducting a pay audit and taking action to close our organisation’s pay gap. @WGEAgency

Media release: 60 days on and Australian women have caught up to men on Equal Pay Day