We have waited 59 [un]equal days and finally today is Equal Pay Day, Wednesday 28 August. [Un]Equal Pay Day marks the additional 59 days women must work from the end of the last financial year to earn the same amount as men.

In Australia, the national gender pay gap is 14% for full-time employees. This figure has only fallen by 0.6 percentage points over the last 12 months.

The 14% gender pay gap means that there is a difference of $241.50 per week between women and men’s earnings on average in Australia.

“The gender pay gap matters for women. Although the gap is closing faster in some states than others, Australian women still have to deal with a pay gap favouring men in every state and territory of our nation,” said Libby Lyons, Director of the Workplace Gender Equality Agency.

“These results also show that the barriers women face in having the same opportunities and rewards in our workplaces as men remain stubbornly persistent. It’s well beyond time for this to change.

“We have to see more employer action on addressing pay equity if we are going to keep reducing the gender pay gap. I urge all Australian employers to take action now.

“The gender pay gap will not close on its own. It will only close if all of us – employers and employees, women and men – work together to make it happen”, she said.

How does my state compare?

The Agency has calculated each Australian state and territory's own [Un]Equal Pay Day. While some Australian states are leading the way in closing the gender pay gap, others are lagging behind.

Why does it matter?

[Un]Equal Pay Day matters because it is a symbol for women’s potential not being fully realised or valued in the workplace.

The national gender pay gap has far reaching consequences for individuals, families and the Australian economy. On average, women today will retire with 40% less superannuation than their male counterparts. The homelessness rate for women over the age of 55 is on the rise, marked by an increase of 31% between 2011 and 2016. Increasing women’s participation in the workforce is also key to boosting Australia’s productivity and innovation.

Have you heard? It’s [Un] #EqualPayDay today! A 14% national gender pay gap means women work an extra 59 days to earn the same as men. Isn’t it time we close the #genderpaygap? #TheGapMatters @WGEAgency

? Tell us what you would do with an extra 59 days

It’s [Un] #EqualPayDay today! Women had to work 59 extra days to earn the same as men this financial year. If I had an extra 59 days... [EG: I would learn how to say the words “the gender pay gap” in 100 different languages]. #TheGapMatters @WGEAgency

Don't forget to use the hashtags #EqualPayDay and #TheGapMatters and tag WGEA!

Be a part of our #TheGapMatters campaign by sharing your story

?️ Share why the gender pay gap matters to you 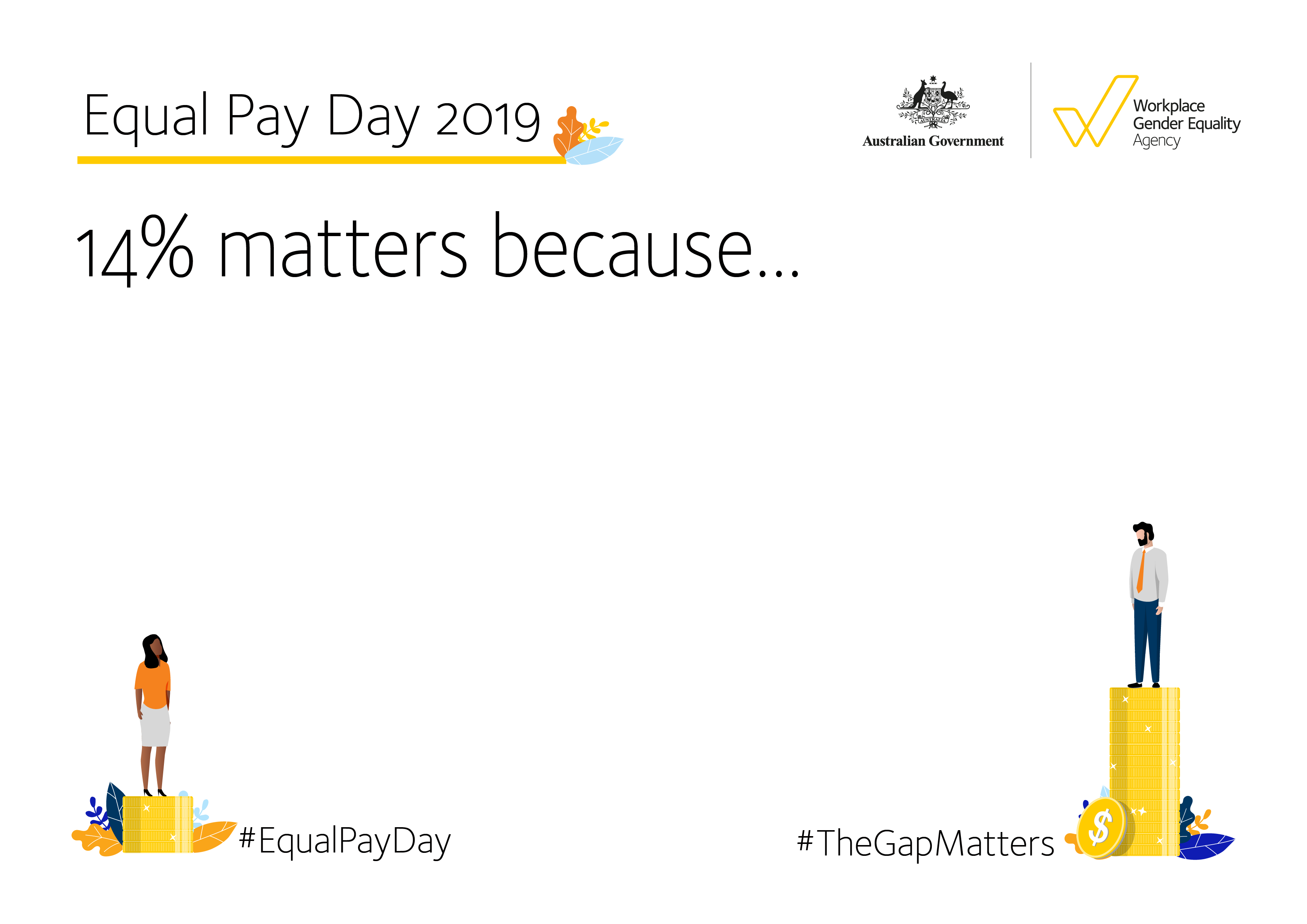