Gender inequality is not experienced in the same way by all women and men. Different dimensions of identity, including race, geography, sexuality, and disability can intersect and influence individual experiences and outcomes at work. Systemic discrimination and bias – both conscious and unconscious – can create inequalities at every stage of the employment cycle.[1] [2]

The interconnected nature of social categorizations such as race, class, and gender as they apply to a given individual or group, regarded as creating overlapping and interdependent systems of discrimination or disadvantage. (Dictionary of Oxford Languages).

Research on intersectionality in the workplace is growing [3], but fragmented. Overall, it shows that women and men from diverse groups can face multiple and compounding disadvantages when participating and progressing in the labour force.[4][5] [6][7] These range from inequitable access to employment opportunities and compounding biases in recruitment and promotion to cultural barriers and increased likelihood of discrimination in the workplace.

The data that the WGEA collects under the Workplace Gender Equality Act 2012 relates to women and men. Age, location and gender non-binary data is collected on a voluntary basis. While the legislation does not extend to other demographics, we recognise the importance of considering how employees experience multiple and intersecting forms of bias, discrimination, and disadvantage at work. This is critical for building a more detailed picture of Australian workplaces, developing tailored responses to gender equality issues, and ultimately achieving workplace gender equality goals for all.

In addition to any moral and human rights case for achieving diversity and inclusion at work, the business case is well established. The Diversity Council Australia’s Inclusion@Work Index, which surveys over 3,000 working Australians, shows that inclusive organisations have improved performance and innovation, better customer service, more satisfied and secure staff, and less harassment and discrimination.[8]

A research series by McKinsey and Co. provides a strong business case for diversity in leadership. The 2020 report found that companies with greater gender and ethnic diversity were more likely to out-perform and be more profitable than their peers.[9]

The State of the Service 2018–19 report echoes these sentiments for the Australian public sector’s workforce, reporting that, ‘For years, we’ve known that diverse teams are better at solving problems. Inclusive workplaces also have more engaged employees. We achieve better outcomes when staff know their views count; and when they feel empowered respectfully to contest policy and ideas…Diversity and inclusion matter for improved function … Embracing diversity also drives innovation’. [10]

The information below highlights some of the intersecting challenges that women and men from diverse groups can face when entering and progressing in the workplace. It also provides links to further information and resources from relevant organisations.

Australia is a culturally and linguistically diverse nation. The 2016 Census shows that nearly half (49%) of Australians were either born overseas or one or both parents were born overseas. Further, with over 300 separately identified languages spoken in Australian homes, more than one-fifth (21%) of Australians speak a language other than English at home.[11]

The Federation of Ethnic Communities Councils of Australia

The Refugee Council of Australia

The Australian Bureau of Statistics

People with disabilities face a range of challenges seeking and progressing at work, including attitudinal, informational, physical, and systemic barriers. ABS data[15] shows that:

Employment discrimination against people with a disability is ongoing and systemic and discrimination can enter at any point of the employment cycle, from recruitment onwards [17].

Women with disability face compounding discrimination in the biases in the workplace. They have a lower workforce participation rates; are more likely to work in informal, vulnerable, part-time and lower-paid jobs; are less likely to be in paid workforce; and have lower incomes than men with disabilities.[18]

The Australian Institute of Health and Welfare

The Australian Institute of Health and Welfare

The Gari Yala: Gendered Insights Report is a collaboration between the UTS Jumbunna Institute for Indigenous Education and Research, the Diversity Council of Australia and the Workplace Gender Equality Agency (WGEA). It examines the experiences of Aboriginal and Torres Strait Islander women inside Australian workplaces, revealing that Indigenous mums and carers are the most likely group to experience discrimination. It’s a follow-up to the ground-breaking Gari Yala (Speak the Truth) report released last year. 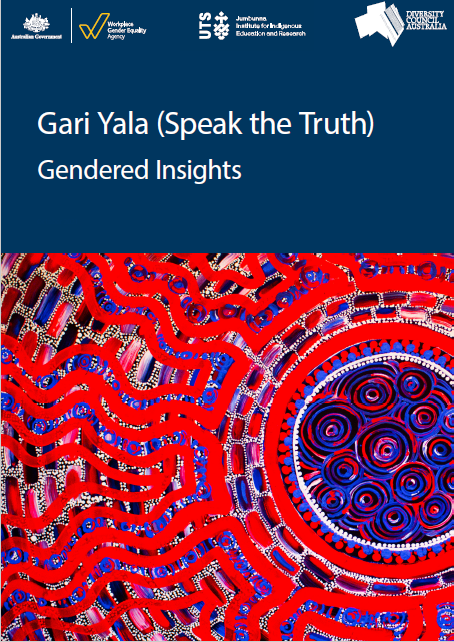 More than one in four Australians live outside of a major city—18% in inner regional Australia, 8% in outer regional Australia, and critically, around 1% in remote and very remote locations, respectively.[25] With limited access to education, employment opportunities and health and social services, people in regional, rural and remote locations have, on average, lower employment-to-population ratio, lower rates of education, and lower average incomes than metropolitan areas.[26]

The barriers impacting employment in remote and very remote communities are amplified for some groups. Women in these locations are more likely to face workplace discrimination, sexual harassment and violence, and economic insecurity.[27] Research suggests that cultural background, sexual orientation or age can also contribute to discrimination in rural communities.[28] Aboriginal and Torres Strait Islanders are also more likely to live in remote areas than non-Indigenous Australians.[29]

The National Inquiry into Employment Discrimination Against Older Australians and Australians with Disability reported that older women workers have a lower workforce participation rate, are less likely to be in paid employment, and have lower average weekly earnings than men. [32] This is in part due to being excluded from the labour market over their lifetimes due to caring roles as well as compounding age and gender discrimination. The report also found that older women are more likely to ‘be perceived as having outdated skills, being too slow to learn new things or as someone who would deliver an unsatisfactory job’.[33]

The gender pay gap compounds over a lifetime into what is known as the lifetime earnings gap'.This also has implications for the amount of superannuation Australian men and women retire with. In 2013-14, the median super balance for a woman in the 55-64 age group was $80,000 compared to $150,000 for men – resulting in a superannuation gender gap of 47% [32]

Council on the Ageing (COTA)

The term LGBTQI+ people includes lesbian, gay, bisexual, transgender (gender diverse), queer or questioning and intersex individuals although this terminology may not capture the full diversity within this community.

Employees who identify as LGBTQI+ may experience discrimination or disadvantage in the workplace due to their sex, sexual orientation, gender identity or all the above.

Evidence indicates that LGBTQI+ employees are more likely to report lower levels of inclusion and higher levels of exclusion in the workplace[34] A survey conducted by PWC Australia found that 50% of LGBTQI+ respondents had observed homophobia in the workplace and that these experiences were particularly concentrated in certain industries[35]. LGBTQI+ employees that experience other intersecting forms of discrimination in addition are also less likely to be ‘out’ at work.[36]

According to the Australian Human Right’s Commission, some common forms of overt discrimination experienced by this group are refusing employment or promotion on the basis of their sex, sexuality or gender identity. [37] For trans or intersex employees, this also might include not being recognised as their gender.[38]

Discrimination against LGBTQI+ people in the workplace may also be subtle. Some less overt forms of discrimination can include:

Carers support people with medical conditions or who have a disability, substance abuse issues, or those who are aged and/or frail [40]. They may provide help and support with daily activities for the person being cared for, such as physical and personal care or providing transport but it can also involve other forms of care such as providing emotional support, supervision, advocacy and service coordination.[41] The term carers can also refer to people who care for minors. Workplace issues related to this type of caring are covered extensively in other areas of our website, such as in our parental leave resources.

Overall, carers may be:

The Fair Work Ombudsman: Flexibility in the Workplace

The Department of Social Services

[18] Frohmader, C. 2014. ‘Gender Blind, Gender Neutral’: The effectiveness of the National Disability Strategy in improving the lives of women and girls with disabilities. Women With Disabilities Australia (WWDA). Available at: https://wwda.org.au/wp-content/uploads/2013/12/WWDA_Sub_NDS_Review2014.pdf