Although all industries have gender pay gaps in favour of men, the actual dollar amounts vary widely between industries.

The large differences between the total remuneration and base salary gender pay gap in the Financial and Insurance Services, Construction and Rental, Hiring and Real Estate Services industries suggest additional payments such as bonuses and commissions are a factor. 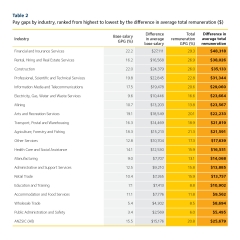 All industries have a gender pay gap in favour of men

Financial and Insurance Services remains the industry with the highest total remuneration gender pay gap at 29.3%. However, it has decreased year-on-year since 2013-14.

Rental, Hiring and Real Estate Services has replaced Construction as the industry with the second-worst gender pay gap at 26.9%. The gender pay gap in the female-dominated industry of Health Care and Social Assistance barely shifted, declining by just 0.2pp (up 1.2pp from 14.7% in 2015-16 to 15.9% in 2018-19). 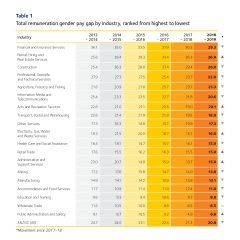 Gender pay gaps favour men across all levels of the workforce

Gender pay gaps are influenced by a range of factors including non-salary benefits such as bonuses at senior levels, reliance on awards and collective agreements in some occupations and the concentration of women and men in different industries.

The gender pay gap has increased in two of the four manager categories over the past 12 months with the largest increase occurring in the Other executives / general managers category. There has also been an increase in three of the seven occupational categories. The occupation with largest increase in its gender pay gap this year was Community and personal services with a 2.1pp increase. 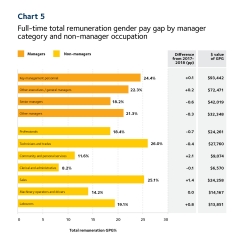 More employers than ever recognise the importance of looking at their own data when seeking to improve gender equality within their four walls. Workplace Gender Equality Agency (‘WGEA’) data showed that in 2018, 40% of organisations conducted a gender pay gap analysis.

In 2019, [Un] Equal Pay Day falls on Wednesday 28 August, marking the additional 59 day’s women have to work from the end of the last financial year to earn the same amount as men. [Un]Equal Pay Day is a symbolic indicator of the significance of the national gender pay gap and why it matters for Australian women.