All Industries
Women in leadership

While Australia is making progress on many aspects of gender equality, female representation in leadership continues to be a cause for concern. 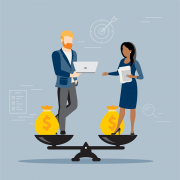 The business case for women in leadership

The Gender Equity Insights series, undertaken by the Bankwest Curtin Economics Centre in partnership with the Workplace Gender Equality Agency over five years has uncovered critical evidence of the importance of female representation in senior leadership roles—not only to reduce the gender pay gap but to improve company profitability and productivity.

In 2016 and 2017, the research shows that increasing the representation of women in executive leadership roles is associated with declining organisational gender pay gaps:

The research demonstrates that increasing the representation of women across each of the key leadership roles in an organisation added market value of between $52m and $70m per year for an average sized organisation. These findings are statistically significant, meaning the association between women in leadership and business performance is causal.

The Business Council of Australia, McKinsey & Company and the Workplace Gender Equality Agency teamed up to undertake a study using three years of WGEA data and more than 40 interviews. The result, Women in Leadership: Lessons from Australian companies leading the way, provides an evidence-based recipe for dismantling barriers to women’s participation at senior levels and a correlation between representation of women in senior roles and the practice of normalising flexible work.

Based on the observations of leading practice made for the report, a 10-step recipe for getting more women into leadership was designed:

Access the resources below for more information about supporting women in the workplace: