News
Gender Equality
For everyone

Each year, the United Nations headquarters in New York hosts delegates from around the world to participate in the Commission on the Status of Women (CSW). CSW is the principal global intergovernmental body exclusively dedicated to the promotion of gender equality and the empowerment of women. This year, due to the implications of COVID-19, CSW was cancelled. Our Director Libby Lyons was due to present at CSW and whilst this wasn’t possible, the University of Canberra and 50/50 by 2030 Foundation hosted ‘Seize the CSW Moment’, an event to showcase all the Australian presentations that would have been made at CSW.

Here is an extract of Libby Lyon’s speech at Seize the CSW Moment, published by Broad Agenda:

The gender pay gap is too high. Currently, our calculations based on Australian Bureau of Statistics data, show that it sits at 13.9%. This is the lowest it has ever been and that is great. If you look at just our dataset, which covers 4.3 million Australians, it sits at 20.8% of the total remuneration. That takes into account superannuation and discretionary payments such as shift allowances. This tells me that women are absolutely discriminated against when it comes to discretionary pay.

Over the five years that we have been collecting data, the gender pay gap has dropped every year. We must celebrate that.

However, over the five years that we have been collecting data, the gender pay gap has dropped every year. And we must celebrate that. This is the beauty of collecting the data. We can actually measure what is happening.

Having said that, there is still a pay gap in favour of men in every industry and every occupation, even in the female-dominated industries. In fact, sadly, in the healthcare and social assistance industry, their gender pay gap has increased over the last two years. Sometimes I think that female-dominated industries believe that because they are female-dominated, they do not have a problem. Well, they have a big problem. Their problem is that they have too many men in management and not enough men doing that lower-paid, lower-value work.

Over 75% of our employers now have a gender equality strategy or policy in place.

The other great news is that over 75% of our employers now have a gender equality strategy or policy in place. That has gone up over the last five or six years by about 10 or 11 percentage points. To have three quarters of all of organisations with a policy or strategy in place is great. It means they have at least thought about it and they are hopefully doing something about it.

If we look at action on pay equity, almost 45% of all our organisations are doing a gender pay gap analysis. That is really important because one of the first things that it will tell them is whether or not they are meeting their legal requirement to pay women the same as men for doing a job of the same or comparable value. Fifty-one years ago, Australian women won the right to equal pay. Yet it may surprise you to learn that there are many employers out there who are still not meeting their legal obligations.

The gender pay gap is caused by lots of different things. Too many men in management, too few men in lower-paid roles, and all those things fluctuate on a daily, monthly, annual basis. No organisation will ever have a zero pay gap. So, don't automatically believe an organisation if it says it's closed its gender pay gap. It is probably just meeting its legal obligations.

39.4% of all managers were women and 43.8% of all appointments into management went to women. Based on that trajectory, we will see gender balance at most management levels in 20 years.

Another area where we’re doing really well is women in management. Last year, 39.4% of all managers in our dataset were women. That’s pretty good. Also last year, 43.8% of all appointments into management went to women. Based on that trajectory, we will see gender balance at most management levels in 20 years. Considering where we have come from, this isn’t too bad. But I will really depress you now, because at CEO level, it’s going to take us more than 80 years to reach gender balance.

Another important area is flexible work. This [COVID-19] is an amazing time to actually put flexible work policies into practice. This will prove to organisations they can have people working flexibly and be productive. Wouldn’t it be great if more employers found out what we know already: that organisations become more productive because people are working flexibly? And that is something that we do know. 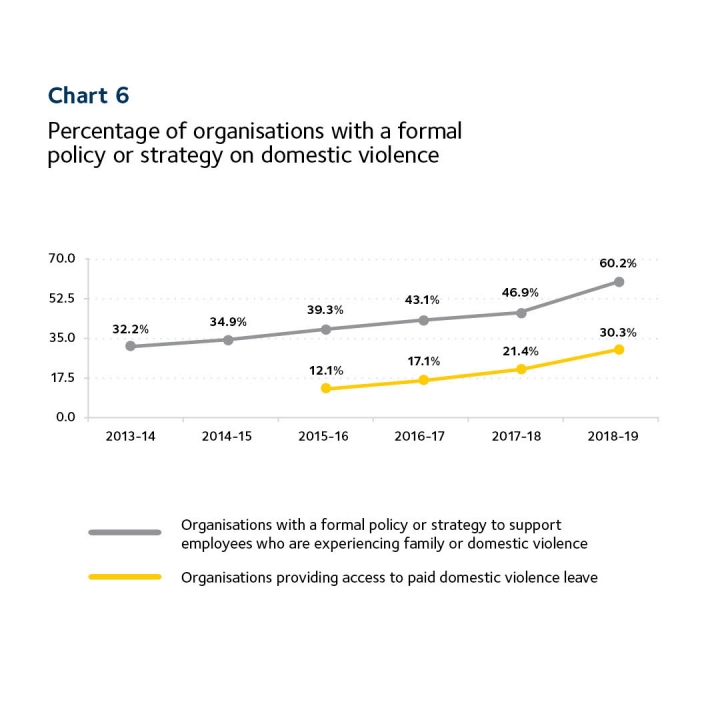 So where aren’t we doing so well? We’re seeing organisations putting policies and strategies in place but they’re not really taking action. If we look at the gender pay gap, 45% of organisations have done a gender pay gap analysis but, of these, two out of five know that there is a gap but are not doing anything about it. They’re the ones we’re targeting.

Just 2.3% of organisations have set targets for men to take up flexible work. And we know that men working flexibly is the key to change.

Paid parental leave is another area where there’s trouble. Over half of all our employers offer no paid parental leave. Smaller organisations are not offering paid parental leave. We’ve got to get it through to employers that they can’t look just at the short-term cost here. They’ve got to look at the long-term benefit. If you lose your employees when they have a child, you are going to have to pay out to recruit and retrain. Each year Australian employers are losing $364 million on unnecessary recruitment costs.

So, what are the solutions to these problems? Accountability is really important. Boards and executive levels have to be accountable for outcomes on closing gender pay gaps, and improving access to flexible work and paid parental leave for both women and men.

We’ve got to engage men. We must recognise that they need to be able to work flexibly and take up paid parental leave. Younger men want an active role in family life. They’re not being given the opportunity by employers to do that. We have to normalise flexibility for men and we have to normalise paid parental leave. We’ve got to get rid of these primary and secondary carer labels. This is rubbish. We are all parents.

If we change the working conditions for employees, the choices that both women and men can make change too. Think about it this way, if a man doesn’t have access to paid parental leave, what choice does that give his female partner? None.