Workplace gender equality is achieved when people are able to access and enjoy the same rewards, resources and opportunities regardless of gender. Along with many countries worldwide, Australia has made significant progress towards gender equality in recent decades, particularly in education, health and female workforce participation. However, the gender gap in the Australian workforce is still prevalent. Women continue to earn less than men, are less likely to advance their careers as far as men, and accumulate less retirement or superannuation savings. At the same time, men have less access to family-friendly policies such as parental leave or flexible working arrangements than women. The aim of gender equality in the workplace is to achieve broadly equal opportunities and outcomes for women and men, not necessarily outcomes that are exactly the same for all.

To achieve this requires:

Achieving gender equality is important for workplaces not only because it is ‘fair’ and ‘the right thing to do,’ but because it is also linked to a country’s overall economic performance.

The Global Gender Gap Report published by the World Economic Forum states that gender equality is not only a fundamental human right but is linked to a country’s overall economic performance. 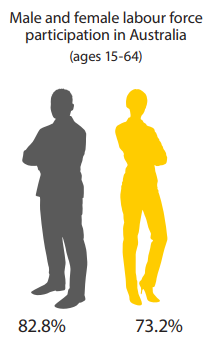 “People and their talents are among the core drivers of sustainable, long-term economic growth. If half of these talents are underdeveloped or underutilized, growth and sustainability will be compromised. Moreover, there is a compelling and fundamental values case for empowering women: women represent one half of the global population—they deserve equal access to health, education, earning power and political representation” (World Economic Forum, 2015).

Goldman Sachs & JBWere calculated that the rise in female employment since 1974 has boosted Australian economic activity by 22% (Goldman and Sachs & JBWere, 2009). Projections by KPMG indicate that if the labour force participation gap between men and women was halved, Australia’s annual GDP would increase by $60 billion in just 20 years. Our cumulative living standards would also rise by $140 billion in this time (KPMG, 2018).

Australia has an ageing population and this is expected to continue reducing labour force participation rates as older Australians continue to retire. Overall, participation for all people aged 15 years and over is projected to fall from 64.6 percent in 2014-15 to 62.4 percent in 2054-55. It is anticipated that these declining rates will detract from real GDP growth per person (Commonwealth of Australia, 2015).

Female employment has been rising since the 1970s. Based on this strong growth, female labour force participation rates are projected to grow to approximately 70 percent by 2055 (Commonwealth of Australia, 2015). The increase in female participation rates is, amongst other things, due to increased levels of education, changing social attitudes towards gender roles, declining fertility rates, improved access to childcare services and increased uptake of flexible working arrangements.(BCEC 2016) However, Australia still has relatively low female participation rates in comparison to many of our OECD peers (OECD Data Centre, 2018).

Lifting female labour force participation in Australia will be instrumental to offsetting the effects of our ageing population (KPMG, 2018). Employers will need to play a role by ensuring that conditions in the workplace support male and female employees to more equitably balance their work and home lives. Some examples of policy initiatives to boost female participation include access to parental leave and flexible working arrangements, pay equity and greater female representation in leadership positions.

The Bankwest Curtin Economic Centre (BCEC) has found that gender pay gaps lead to significant earnings shortfalls for women across their careers. Utilising WGEA data, the report found that if women and men both progress at the same pace, working full-time and reaching a KMP roles in their tenth year, men could expect to have earned $2.3 million while women would have earned $1.7 million in base salary over this period (BCEC, 2016). The lifetime earnings gap is important to the Australian economy because as a demographic, older women are far more likely to live in poverty and be reliant on the social safety net (WGEA, 2017). Currently the average Australian woman retires with approximately 40% less in their superannuation balance than the average man (Australian Bureau of Statistics, 2018). It is imperative that the lifetime earnings gap is closed in order for women to retire in economic security.

Other future challenges are likely to involve ensuring that the Australian labour force is adequately prepared to keep up with rapidly advancing technology. The Business Council of Australia identifies the current trends as increased casualisation of the workforce and a higher proportion of employees electing to work part-time to better balance their work and life (Business Council Australia, 2017). Future challenges are likely to come from increased automation of low-skilled jobs, which may see certain industries shrink significantly or possibly disappear (Business Council Australia, 2017). At the same time, there is an emerging demand for new jobs and skills that may be difficult to meet. There will be continuous job growth in traditionally female-dominated job roles. Australia’s health care and social assistance industries are female dominated and have been the largest job creator in the last 30 years (Business Council Australia, 2017). Notions of ‘women’s work’ and ‘men’s work’ will need to be retired in order for the Australian economy to adapt to these challenges.

Increasing women’s participation in the workforce has positive impacts on organisational culture and on operations.

A diverse and inclusive workforce, regardless of size and industry, generates tangible benefits, such as increased efficiency, productivity, innovation, creativity and improved employee engagement. A diverse workforce tends to produce a more holistic analysis of the issues an organisation faces and spurs greater effort and motivation, leading to improved decision-making (Centre for Ethical Leadership, 2013).

There is significant evidence from across the globe demonstrating the positive impacts on company performance of female representation on boards, in executive management and senior leadership (Centre for Ethical Leadership, 2013). Increased gender diversity on boards and senior executive positions is associated with better financial performance (Senator the Hon. Michaelia Cash, 2014).

Another study from the US examined the performance of 1,500 companies over 15 years and showed that women’s representation in senior management is associated with improvement in organisational performance where a company focuses on innovation (Dezso, C L and Ross, D G, 2012). The study showed that at an average level of innovation intensity, the presence of a woman in top management amounts to creating extra market value for each firm of approximately US $44 million.

The correlation between more female leaders in top leadership positions and increased financial profitability was also evident in an analysis of the performance of 21,980 firms in 2014 in 91 countries by the Peterson Institute for International Economics (Noland, M., Moran, T., & Kotschwar, B. R., 2016).

Diverse teams are associated with greater innovative capacity for an organisation. International research examining gender diverse teams suggests that more gender-balanced teams are better in promoting an environment where innovation can flourish compared to teams of one particular gender (Gratton, et. al. 2007). 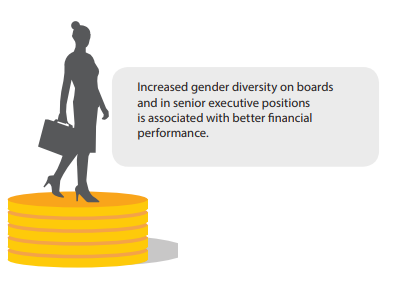 A study by Credit Suisse acknowledges that there are a range of reasons why company performance and gender diversity may be linked (Credit Suisse, 2012). One factor is that well managed diversity brings together varied perspectives, produces a more holistic analysis of the company issues and spurs greater effort, leading to improved decision-making.

Improving gender diversity across the entire workforce may be associated with improved company performance. Research into over 500 US companies found a link between a gender diverse workforce and the organisational performance using measures such as sales revenue and number of customers (Herring, C, 2009).

Research by BCEC using the Workplace Gender Equality Agency dataset has found a measurable link between gender diversity on governing boards and in senior leadership positions with lower gender pay gaps (BCEC, 2018). The 2017 Report found that organisations that improved gender balance within their executive leadership teams over time had the largest decline in organisation-wide gender pay gaps (BCEC, 2017). Which means that gender diversity at a leadership level could boost workplace performance while simultaneously acting to correct gendered pay inequities.

When workplaces are equally appealing to women and men, organisations understandably have access to a larger talent pool. Employees value positive workplace cultures and environments that offer gender equality policies and practices, flexible working arrangements and support for employees with family and caring responsibilities.

Flexible working conditions can be a critical factor in attracting top talent in all industries.

Workplace policies that support gender equality are an important tool to retain talented employees. Research by Kaplan, Wiley and Maertz  (2011) shows that employees are more likely to remain with an organisation in which there is a proactive diversity ‘climate’ as they perceive a concrete payoff to themselves by staying in an organisation they view as fair (Kaplan, D M, Wiley, J W, & Maertz, C P, 2011). The Business Council of Australia recommends a variety of financial and tangible incentives to maintain workforce participation, particularly for parents and carers, but also for people approaching retirement age. The main incentives that help drive employee retention are workplace flexibility, breastfeeding facilities, return to work programs and parental and carers leave provisions (Business Council of Australia, 2013). Employees are more likely to be engaged and motivated in workplaces with access to flexible working arrangements.

High staff turnover is associated with a loss of specialist knowledge and productivity. The costs associated with hiring and training new employees can also be high. Research by the Society of Human Resource Management suggests that the total costs associated with employee turnover can range between 90% and 200% of the annual salary, depending on the type of job (Society for Human Resource Management, 2008). The Australian economy loses approximately $3.83 billion in productivity and $385 million in avoidable recruitment costs each year (PwC, 2014).

The benefits of inclusive workplaces to organisational reputation are evident in the strong interest in the WGEA Employer of Choice for Gender Equality citation (EOCGE). Citation holders recognise that gender equality is critical to an organisation’s success and is viewed as a baseline feature of leading organisations.

A study into leading Australian organisations conducted by Charlesworth, Hall and Probert confirms that preserving and enhancing the organisational reputation is a significant motivating factor for developing gender diversity strategies (Charlesworth, S, Hall, P and Probert, B, 2005).

Organisations with gender equality policies and strategies that include family friendly workplace policies and that address sex-based harassment and discrimination against employees are reducing the risk of workplace discrimination cases, which can potentially be damaging for a company’s reputation.