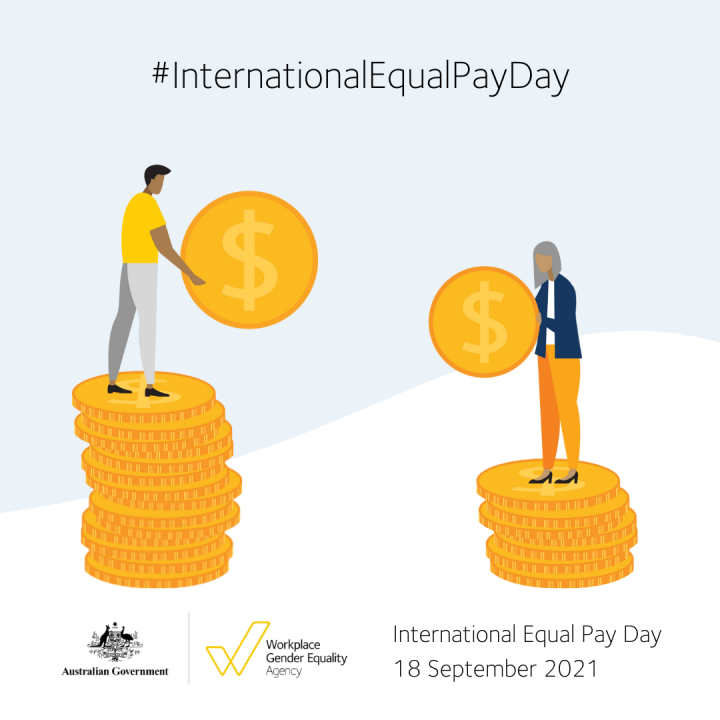 The year is 2021, and women across the country are working nearly two months more to earn the same, on average, as men did last year.

Why? Because the gender pay gap is real, and in the last six months, it has grown.

Each year, the Workplace Gender Equality Agency calculates the number of extra days women need to work to reach earnings parity with men through a measurement known as the gender pay gap.

It means women had to work about two months more to earn the same as men did last financial year.

The day we recognised finally catching up to the earnings of men, Equal Pay Day, was on August 31 for Australia.

Around the world, the UN has declared September 18 as International Equal Pay Day. Striving for Gender Equality is one of the key aims tracked by the UN – Sustainable Development Goal 5 specifically aims to achieve gender equality and empower all women and girls worldwide.

As we head into this international day, it’s an opportunity to take a closer look at what gender equality in Australia looks like. Here are five facts about the gender pay gap in Australia today, and what Equal Pay Day means for our country.

#1: It is not actually about equal pay

Equal Pay Day is a symbolic day recognised in countries around the world to represent the inequalities faced by working women.

But don’t be fooled by the name.

Equal pay – where men and women receive equal pay for work of equal or comparable value – has been a legal requirement in Australia for over 50 years.

One of the main misconceptions we hear from people who don’t “believe the gender pay gap exists” is usually the retelling of an anecdote: that men and women in their company, doing the exact same role, receive the exact same pay.

And so they should - anything else is unlawful in Australia. This is not what the gender pay gap represents.

Instead, it measures the difference between the average earnings of women and men in the workforce at an organisation, industry and national level. It is an internationally established measure of women’s position in economy in comparison to men.

We use Equal Pay Day as a way to draw people’s attention to the national gender pay gap. It is a time to recognise gender discrimination continues to exist in our country; a divide which is a result of the social and economic factors that combine to reduce women’s earning capacity over their lifetime.

#2: It starts straight out of university

Some of the most compelling evidence to debunk some of the myths and misconceptions surrounding this topic comes from looking at the starting salaries of university graduates.

We know one of the many factors contributing to the pay gap is time taken out of the workforce, traditionally by women, for caring responsibilities.

It stands to reason then: if women are starting out in their careers, and haven’t taken any time out of the workforce yet, then surely there should be no pay gap?

Our WGEA higher education insights paper published in April 2021 revealed that men’s undergraduate starting salaries were higher than women’s in 15 out of 19 fields of education.

The numbers also show across sectors, the median undergraduate starting salaries for women are 2.5% less than for men. This gap widens 13% for postgraduate (coursework) graduates.

#3: It continues through all sectors – even those with more women employed

More men in a workforce traditionally leads to more men in the higher-paid roles. But what about the workforces with more women? Do they close the pay gap?

The data reveals the pattern of a pay gap in favour of men continues across all sectors, no matter the gender divide.

The health care and social assistance industry has the most women of all – making up 80% of the workforce according to our 2020 WGEA census - yet they still have a gender pay gap of 21% according to the latest ABS figures.

Continuing the trend, looking at the proportion of women leaders in this industry is also revealing. Despite women making up more than three quarters of these caring professions, less than half - only 43% - of their CEOs are women.

#4: It impacts women all the way to retirement

The gender pay gap has long-lasting effects. On the current trends, the average earnings gap between women and men is $261.50 a week, or more than $13,000 over the course of a year.

Or another way to look at it – at these rates, for every six years men work, Australian women need to work seven to earn the same amount.

These earning differences compound over a woman’s working life all the way to retirement.

A combination of factors affects the lifetime economic security for women. Men out-earn women in every industry and occupational level. Women are under-represented in senior executive and management roles. Female-dominated occupations and industries attract lower pay than male-dominated ones. Women work part-time at three times the rate of men and do the bulk of the of unpaid domestic and caring work in our society.

Together, it means it is likely that over a lifetime, women will earn less than men, be less likely to advance their careers as far as men and accumulate less superannuation and savings than men.

When it comes to retirement age, women are then more likely to retire in poverty than men. The impacts of the gender pay gap are real, and they inflict a harsh economic reality on women’s lives as a result.

#5: It is even greater than it seems at first glance

It is worth noting a few points about the ABS data used to calculate this gap: it is an average only, accounting for the weekly earnings of full-time employees for the six months until May 2021; and it does not break down further to represent the earnings data of women of different ethnic backgrounds, cultural backgrounds, disabilities, or sexualities, who experience compounding inequalities at work.

On the current calculations, the pay gap is 14.2% - or the equivalent of about two months more that women need to work to earn the same as men.

But this is just one way to measure it.  If we expand the data set to include the average weekly earnings data on earnings for all hours worked, including overtime and part-time workers, the results are even more sobering.

On this measure, the national gender pay gap more than doubles to 31.3%.  This means women’s average weekly total earnings are $486.20 less per week than men.

No matter which data set is used though, the outcome remains the same: they all show a significant pay gap in favour of men.

But it can change.

Start by asking the question, What’s Your Pay Gap?

While the statistics may represent a bleak outlook for Australian women, it doesn’t have to stay this way. Awareness is the first step to action.

To address the pay inequities, many organisations first need to see the evidence that they have an issue with gender pay inequality by conducting pay audits.

For employees who are not in control of an organisation’s pay, what else can be done at an individual level?

The premise for our data collection at WGEA is transparency and accountability.

Every private sector employer in Australia with more than 100 employees is required to submit their gender equality data each year to WGEA. We have a world-leading data set, and it is publicly available to search.

Head to our Data Explorer, find your company, and research their gender equality data. See if they have conducted a gender pay gap analysis and what action, if any, they have taken as a result. Then, start a conversation with your colleagues and in your workplaces – so that the pay gap and its causes are front and centre of discussions, and managers are reminded that this is an issue worth talking about.

Closing the gender pay gap goes beyond just ensuring equal pay. It requires cultural change to remove the barriers to the full and equal participation of women in the workforce.

But without taking that first step to understand the problems, we will have too many years to go until women and men are genuinely equally valued in our workplaces.

#WhatsYourPayGap: Here’s what you can do:

This article by WGEA Director Mary Wooldridge was originally published on the Lifehacker Australia website.